Posted by Camp Wawona at 8:12 AM No comments:

While ultimately a blessing, Camp Wawona’s Junior Olympic swimming pool can be a curse to keep clean. Each week staff must scoop out organic debris, dirt, and suicidal mice, all while trying to balance chlorine and PH levels.

Well no longer. Last week camp staff installed a new pool cover that will cut pool maintenance easily in half. Sure, water chemical levels must be monitored but overall water cleanliness just became a snap.

“I think it’s exactly what we needed,” said Jerrod Gabel, Camp Wawona’s Director of Maintenance. “It’s going to help keep the water clean and give us more time to work on other things.”

Installing the cover isn’t easy. Holes must be drilled into the concrete around the pool’s parameter and the special bolts that can rotate flush with the surface of the concrete when not in use must be installed.

The new cover, which was purchased with funds donated by Dr. and Mrs. Jack Sloan, will also assist in protecting the pool from thick ice, which can expand and crack the pool. It comes on the heels of a long winter spent chipping ice with poles, planks, and shovels so camp staff will have to wait another three seasons to see what the new cover is really made of. Still, covering the pool is just one more step Gabel’s plan to keep camp up and smoothly running. 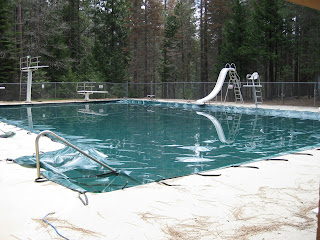 The new cover is laid over the pool. 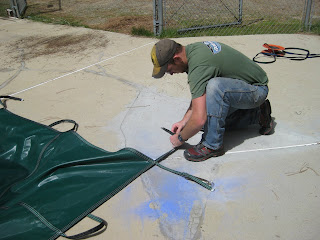 Jerrod Gabel installs a bolt in the cement. 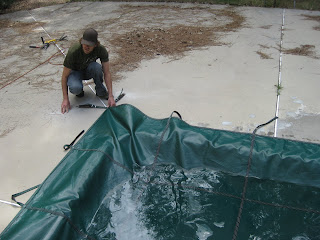 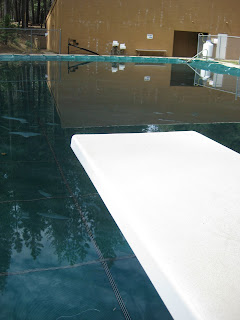 The new pool cover (as seen from the low dive).
Posted by Camp Wawona at 8:10 AM No comments:

Where is Camp Wawona?

Posted by Camp Wawona at 7:01 AM No comments:

Cafeteria Director Paulette Bair scratched two things off her “must have” list last week with the purchases of a cold deck salad bar and tilt skillet.

A new tilt skillet retails at roughly $12,000 while a new cold deck sells for around $20,000 . However, Bair new that she could acquire the tools she needed without having to break the bank.

“After doing some research I started combing the Internet for options,” said Bair. “I saw what I wanted and made offers. We ended up getting the tilt skillet and cold deck for $2,000 each. I couldn’t even build a salad bar for that cheap!”

The Tilt Skillet is waiting for a few parts to convert it from natural gas to propane while the Cold Deck was put to use immediately. Sporting a self-cooling refrigeration system, the new cold deck single handedly replaces two smaller, plastic decks by being longer, sturdier, and taller, making self-service easier and more comfortable. In addition, the new deck is equipped with special serving holes, essentially combining the workload of two cold decks, saving space and increasing room for traffic flow.

Once converted, the tilt skillet’s versatility will cut down food preparation time while creating a safer work environment as the machine assists lifting and/or straining hot foods.

The two purchases are part of Bair’s plan to improve the cafeteria program both immediately and long term as both additions can be transplanted into the new cafeteria later on.

Video and photos are posted below. 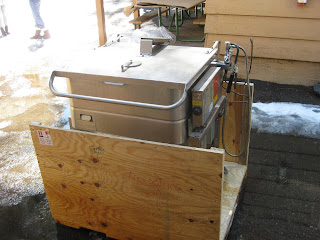 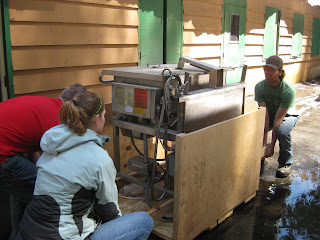 Staff work as a team to move the skillet inside. 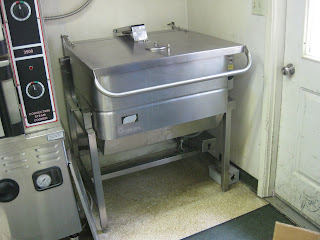 The tilt skillet finds a new home and waits to be converted to propane. 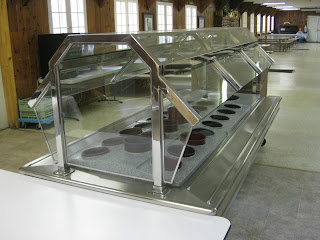 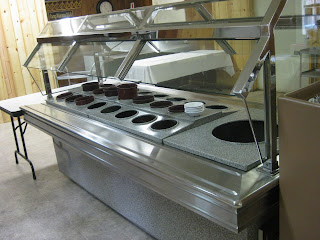 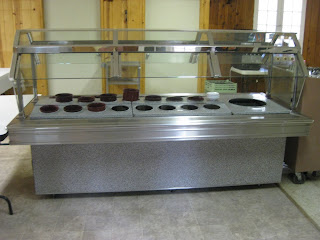 Longer means more people served at one time.
Posted by Camp Wawona at 11:36 AM 1 comment:

Posted by Camp Wawona at 1:44 PM No comments:

The week beginning March 28, 2010 saw Camp Wawona’s new Outdoor Education program get off the ground with it’s first ever full session. Pleasant Hill SDA School students arrived on Sunday evening to find supper waiting for them before diving right into an overview and orientation of the 4-day education adventure on which they were about to embark.

The first full day saw students practicing teamwork and developing leadership skills through a series of low ropes activities and conquered personal fears by taking on the high ropes course.

Students found themselves in a different kind of classroom on day two as they received hands on lessons in Botany, Geography, and creative writing.

Day three had a surprise in store as students awoke to a few inches of snow on the ground. But the snow didn’t hamper the trip through the local community for a lesson in Human History and then on to the valley for a close up look at Geology.

All in all the week went well thanks to the hours of planning and implementing on behalf of Outdoor Education Director Derek Wright and his team of CW Staff.

“We learned a lot from this first week,” said Wright. “It went well but we can make some changes so next time will be even better.”

Video and photos are below. 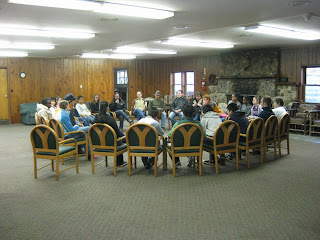 Students gather in the lodge for morning worship. 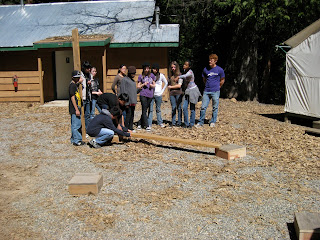 Teamwork is a must to complete this low ropes challenge. 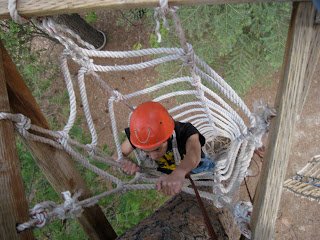 A student climbs up the rope tube and onto the High Ropes Challenge Course. 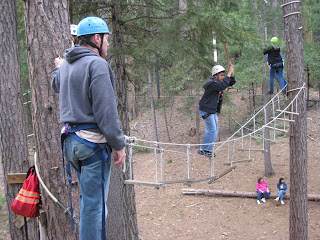 View from the top of the High Ropes Challenge Course.
Posted by Camp Wawona at 1:13 PM 1 comment:

To the local community, indeed to most living inside Yosemite National Park, "Camp Wawona" does not exist. Even though the camp facility has never moved or changed names since it's founding in 1929, mentioning "Camp Wawona" as your destination at any nearly any park entrance (with the exception of the South entrance) will have gate attendants scratching their heads and asking, "Where?"

Instead, it is known as "SDA Camp". The reason? A single sign located near the beginning of Forest Drive, the road that leads to camp, which for decades has pointed the way to "SDA Camp". Locals noted that, thanks to the sign, they have always known who the camp was affiliated with, but never knew it had a formal name.

That's about to change (over time perhaps) thanks, in part, to a new sign which now proudly points the way to "Camp Wawona". The signage change, made several days ago, is already clearing up some confusion among the local community as many are now making the connection that "SDA Camp" and "Camp Wawona" are the same place.

CW Staff hope the sign change will further their efforts to establish a positive connection with local residents and park employees in the weeks, months, and years to come. 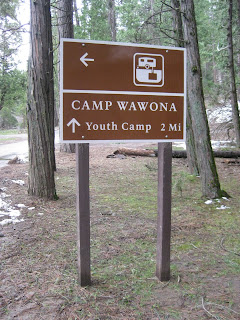